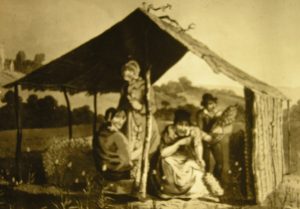 The report on the Dig at York Stadium that we heard all about at our September meeting can be found at the website:

On the 24th May, Alistair Cross, the archaeologist in charge of the dig that was undertaken before work started on the housing development, gave us a presentation describing what had been found. The site had numerous lines of ditches and pits indicating that it was a considerable settlement. A large quantity of artefacts were unearthed including pottery, coins and jewellery. There was also a number of skeletons. All of this evidence is currently being studied but indications are that the settlement dates approximately between AD 50 and AD 350. They also discovered pits and structures that were probably used for grain storage and drying, indicating that the settlement was mostly agricultural. There was no evidence that habitation of the site continued beyond the Roman period. We now look forward to the results of the analysis of all the evidence which we are anticipating will be the subject of another presentation to the society in November.