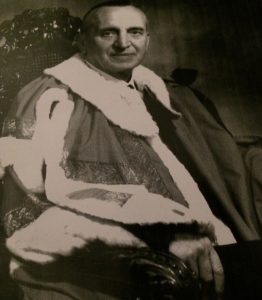 One of Sherburn-in-Elmet’s most famous residents of the 20th century was Baron Ernest Popplewell who began his working life as a humble railway porter and rose to become a Member of Parliament for the Labour Party.

Ernest was born on the 10th December 1899 in Selby to parents John W Popplewell and his second wife Alice. The family moved to Gascoigne Wood railway cottages and later to Sherburn, where they lived according to the 1911 census at Glencoe Cottages [now 46 Moor Lane]. His father unfortunately died in 1910 and so Alice, his widowed mother, was left to bring  up Ernest and his two siblings.

Ernest began work as a 13 year old at Micklefield Pit and then followed his late father and grandfather working for the railways as a lad porter eventually becoming a signalman. This led to his lifelong interest in the National Union of Railway men, which in turn led to his interest in local politics.

Ernest enlisted into the Royal Marine Artillery in 1917 and served in Belgium in the First World War. In 1919 he was gassed during the conflict and was treated at the Royal Navy Hospital Haslar, Gosport, Hampshire  and was subsequently discharged from the Navy.

In April 1922 Ernest married Lavinia Rainbow and they had a son John in 1928. The family were living at Highfield Villas , Sherburn and finally moved to North View, 10 Moor Lane, Sherburn-in-Elmet.

Ernest’s interest in Trade Unions and local politics grew and in1926 he started the Labour Party branch in Sherburn. It was the time of the General Strike and there were a lot of miners in the village suffering from the loss of income. Ernest  then became the first Labour councillor to sit on the Sherburn-in-Elmet Parish Council and the Tadcaster Rural Council.

Ernest continued to work in local politics until he stood for election as a Labour Party candidate. The National Union of Railwaymen had nominated 12 of their leading union members including Ernest and as a result Ernest was entered as a candidate in the 1945 General Election. Ernest won the Newcastle Upon Tyne West seat after the Labour landslide and therefore became a Member of Parliament. Although spending his time between his constituency and London, Ernest and his family still kept their family home here in Sherburn.

Ernest was said to have “vast experience in local government and Poor Law administration” which equipped him well with a knowledge of social and political problems affecting railway employees .This led to him having invaluable insight when drafting legislation necessary for reform.

As an M.P. Ernest’s main area of interest was naturally transport and he served on numerous delegations. He travelled abroad, and on one occasion met President Tito in what was then Yugoslavia.

Ernest became the Vice Chamberlain to the Royal Household between 1947-1951. This was an important role where he had to send daily reports to King George VI regarding what was happening in the House of Commons. This led to Ernest spending time with the Royal Family, and on one occasion photographs were taken of him with them at Balmoral.

In 1951 Ernest received the CBE and he became chairman of the Select Committee on Nationalised Industries from 1964 to his retirement.

Ernest had served over 20 years as an M.P. before his retirement in 1966 after which he was made a life peer in recognition of his work in politics. Ernest took the title Baron Popplewell of Sherburn-in-Elmet [noticeably not using his constituency’s name of Newcastle] in the County of York on the 6th June 1966

Ernest continued to hold the position of magistrate in the West Riding, which he had done so for 36 years until 1971. He did however continue to sit in the House of Lords right up to his death on the 11th August 1977.

Ernest’s wife Lavinia was, like her husband, a much respected member of the community  serving on the Sherburn  Parish Council and the Tadcaster Rural Council for  six years. In fact the villagers of Sherburn named a community centre after her which is still used today- the Lady Popplewell Centre. 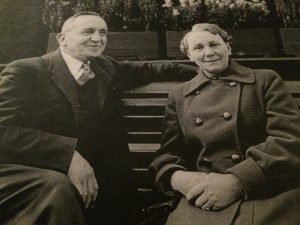 Lord Popplewell , and his wife, remained very fond of Sherburn and the community were very fond of him. This was very apparent after his death when newspaper reports spoke of the sadness felt by many people on hearing the sad news. Ernest’s popularity was due to him remaining an “ordinary working man” even when he became an important politician.

He certainly deserves the recognition of being one of the most important residents of Sherburn-in-Elmet.