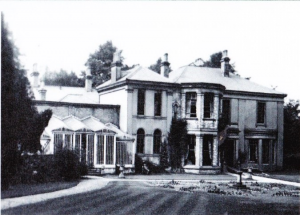 Built around 1847, known as Ashfield House, it first appears in the Electoral Roll for Sherburn in 1848, owner Mr Joseph Clarke, Attorney at Law. Joseph Clarke was born 27th August 1794 in Barnsley. His father was Jonas, Attorney at Law, and Elizabeth Ann. In 1857 Joseph donated £500 along with other notable persons of the village for the restoration of the church. He married twice, firstly Mary and then Jane Joanne thirty years his junior. He died on 24th August 1872 with no issue. His wife moved to Scarborough. The name change from Ashfield House to Eversley Garth appeared in the will of Joseph Clarke in 1872.

In April 1873, the Leeds Times Article read Mr William Day, colliery proprietor of Barnsley has just spent £9,200 to purchase Eversley Garth Estate in Sherburn in Elmet. According to the report in the newspaper these were bad times for colliery proprietors as the men will not work. William Day was baptised 8th December 1822 at Shafton Felkirk and died at Eversley Garth on 17th June 1883. On 1881 census he is married with two daughters and three servants living at Eversley Garth and described as Coal Owner and Land Proprietor. In 1875 he paid for a new treble bell in the Church with an inscription “The Lord to Praise my voice I will raise.” In his will he left £2,544 0s 10d. He was married at Silkstone, and the father of the previous owner had properties in Silkstone. Did they know each other?

In 1884 Henry Liversidge a Timber Merchant and Magistrate from Selby purchased Eversley Garth. He was baptised at Selby Abbey in 1823, and his father was also a timber merchant in Selby. In 1882 he was placed on the Commission of Peace for the West Riding and served on both Selby and Sherburn Bench. He was also a Deputy Lieutenant for the West Riding and Commissioner of Inland Revenue. He was a devoted Wesleyan Methodist. He had a serious accident between South Milford Station and his home in November 1886. He recovered but had no memory of the incident. The Sheffield Daily Telegraph gave a full account. Mr Liversidge was also President of the Sherburn in Elmet Agricultural and Horticultural Society and was a regular prize winner at the Society’s annual show. The 1891 census tells us that the household consisted of Henry, his wife Ellen Mary, and their twenty-two-year-old daughter also called Ellen Mary, plus two servants. In 1910 at the age of eighty-seven with failing health The Sheffield Telegraph announced that he and his two younger brothers were “contemplating retirement.” Mr Liversidge died 27th February 1910, leaving £67,620 3s 0d. The Eversley Garth Estate was up for sale again as quoted in The Leeds Mercury of 7th June 1913.

The new owners were the Fletcher family who moved to Sherburn from Shipley. Joshua Percy Fletcher born 1879 was the son of a prosperous coal merchant in Silsden West Yorkshire. He had established himself as a drysalter [pickle manufacturer] by 1901. Fletcher’s initially produced sauce at the Airedale works in Shipley. He also had a glass manufacturing plant in Leeds. Fletcher’s [ Shipley] Ltd was registered with a capital of £20,000 in 1907. J P Fletcher described his principal occupation in sauce manufacturing in 1911. He acquired the rights to produce “Tit Bits” sauce from Stamp, Bointon & Co in 1913. The Leeds Mercury 3rd November detailed a Record Cow owned by J P Fletcher; a British Friesian cow named Osmanston Jenny producing 2,427 gallons of milk over 365-day period. Many fetes were held in Eversley Park grounds especially in 1931 when a two-day fete in aid of the restoration of the Church. £1,000 was needed. The fete included a tennis tournament, shooting gallery and side shows. A sale of work was included with a baby show. In 1935 the Silver Jubilee of King George V and Queen Mary each child in the village benefited from Mr Fletcher’s generosity. In July 1941 Mr Fletcher purchased the Scarcroft Estate and sold Eversley Garth. The house and estate were up for sale in June 1946 described as a mansion now suitable as private residence or for adaption as a Hostel, Private School Home Institute, Hotel or conversion to flats.

Craven Dairies bought the estate in 1949 to continue breeding British Friesian cattle to produce milk. There was a farm on the park run by Mr Bernard Pease. An article appeared in the Yorkshire Post in 1949 stating that Sherburn Eversley Cricket Club had laid a new ground in Eversley Park before the war a donation of land from Mr Fletcher. The new owners Craven Dairies made a gift of the ground to the Cricket Club, which is still on the park and owned by the Cricket Club. The house was made into flats in the fifties. In the early 1970’s the land was sold to different builders and the present housing estate was built. The last houses to be completed was Carr Avenue in 1978. Date of demolition of house unknown at present time. 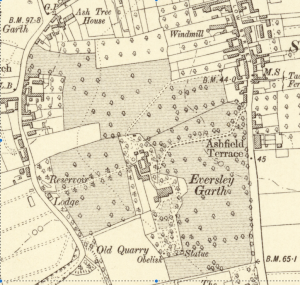 Extent of Eversley Garth Estate in 1908