The site, which lies to the East of Low Street and South of The Fairway, was first investigated in 1997 when 5 trenches revealed ditches forming enclosures and containing Roman pottery and other finds including brooches. Geophysics showed the extent of the ditches, enclosures and fields. 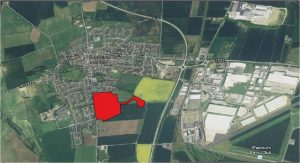 In 2015 the housing developers, Redrow and Persimmon, were obliged to fund a full investigation and they employed MAP Archaeology from Malton to carry out the work. The topsoil was stripped across the whole site exposing all the ditches as well as pits and postholes, 2 stone structures and a number of graves. 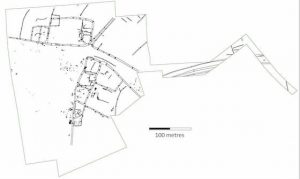 The ditches and pits had all been filled in, either during the use of the site, or as the site was coming to an end, and so they contained in places, rich deposits of roman rubbish, including fragmented pottery, animal bone, charcoal and food waste from fires, and other possibly accidentally lost items.

Most of the pits and the stone structures were identified as having been used for grain storage. The post holes were from wooden round houses that would have been living accommodation for the occupants and their animals.

Of particular interest was a corn drier of a type found elsewhere but unique in terms of the shape of the flues which have a return not found elsewhere. 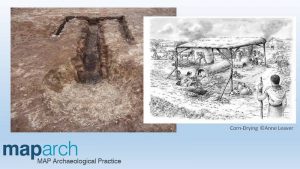 A total of 1526 sherds of pottery were recovered. Unfortunately none of them were intact but nevertheless analysis of the fragments revealed a lot of information. Dating of the ceramic varieties and styles showed a small but significant amount of Iron Age (pre-roman) material and that the main occupation of the site was between the years 50 and 360 tailing away to nothing after 410. The early and late remains, were plotted by where they were found on site, and they suggest that, the northern area had higher amounts of Iron age activity, and the southern area, saw activity continuing the longest into the 4th century. 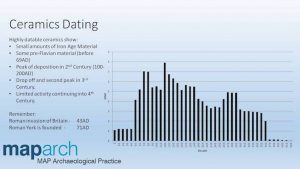 In terms of pottery shapes, jars are by far the most common shape, especially when you include the variations on jar shapes, such as wide mouthed jars, storage jars etc. But we also have a good number of recognisable bowls and dishes, lids, and a smaller amount of cups and beakers. A ceramic specialist has compared the ‘signature’ of the assemblage of types and styles to other sites and concluded that at is atypical for a rural Romano-British site. There are aspects of the assemblage which indicates a higher status supply, such as the relatively low level of jars and the high levels of amphorae, samian and oxidised wares. The presence of Gauloise amphorae, the high levels of Black Burnished ware, and level of rustic ware suggests surprisingly strong connexions with a local militarily supply market. These are more similar to the signature that might be expected from a vicus (civilian settlement, near a fort), rather than an isolated rural farm.The ceramics suggest an early engagement in an at least a partially monetised economy, and a high degree of interaction with Roman trade goods, supply lines and therefore the military.

There were also several unusual objects including 2 fragments of Tazza (which are usually for burning incense) and a possible miniature grey ware pot and these are a good indicator for some ritual component for the settlement. There was also a fragment of an ungent bottle usually associated with bath houses and several fragments of crucible suggesting that there were high temperature industrial processes on the site.

The site revealed 12 adult shallow burials heavily damaged by ploughing. Most were in a crouched position, with no uniform alignment and no grave goods. There was also an intact horse skeleton and 3 infants found in ditch fills, two of which died at the time of birth and one an infant less that one year old. 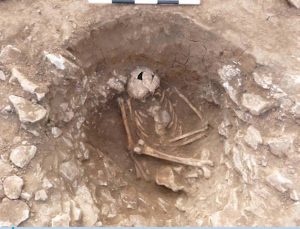 This is a very small number of individuals to consider, so it is hard to really understand any part of the living population of the settlement from these remains. We also don’t know whether some represent the early part of the sites’ history, and others, perhaps those buried in ditches and pits, represent the end of the settlements’ life. One of the future pieces of work will be carbon dating some of the remains.

‘Cribra orbitalia’ are pitting of the eye sockets, and these are generally taken as indicators of poor diet (possible anaemia), poor hygiene and general health stress. Three out of the five skeletons that could be assessed showed the pitting.

Dental enamel hypoplasia (DEH) is the presence of lines, grooves or pits on the surface of the tooth crown, and occurs as a result of defective formation of tooth enamel during growth (Hillson 1996). Essentially, they represent a period when the crown formation is halted, and they are caused by periods of severe stress, such as episodes of malnutrition or disease, during the first seven years of childhood. Five out of 11 individuals with teeth showed hypoplasias.

Over 12,620 animal bone fragments were recovered from the site, of which 1600 were identifiable to species. The majority represented domestic animals but roe deer, hare and weasel are also represented and a range of wild birds were noted, in addition to domestic fowl (chicken). Marine resources were poorly represented with relatively few oyster shells and only one mussel shell present. No fish bones were noted (although this may in part be due to preservation).

Based on the number of bones, cattle dominated the assemblage with sheep/goat occupying a secondary position. These are generally very difficult to tell apart and so are grouped. Horse and pig were represented by a similar number of bones. Dog represented the next most common taxa, while the presence of 16 domestic fowl bones, suggested that chicken played only a small part in the diet of the inhabitants.

By collecting soil samples for various deposits it is possible to analyse these remains for fragments of charcoal, plant remains, flakes of metal, and a variety of other objects too small to be seen by the naked eye, or difficult to collect by hand.The samples from Sherburn produced a significant amount of remains from a variety of locations. The greatest amount of material were carbonised grains, along with fragments of charcoal and a limited number of other items. The agriculture appears to be centred on the production of large amounts of Spelt Wheat, with smaller amounts of barley and oats also being produced. Deposits found in a number of pits, dumps in ditches and particularly in the corn drying oven were dominated by Spelt Wheat.

Other plants found on the site include peas and charcoal from oak, hazel, alder, birch, apple and cherry.

There is more work to be done but a picture is building up of an agricultural community which existed before the roman occupation but very much thrived under its influence possibly by supplying its Legions. The community appears to have fallen into decline at a time consistent with the departure of the Legions and no longer occupied the site at all after about 420 AD.

Many thanks to Alistair Cross from MAP Archaeology for this information, slides and photos.