Begin your walk through historic Sherburn in front of the church porch, facing the church. 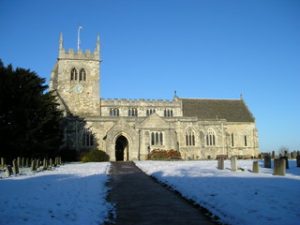 There was a church on this site in Saxon times. It was replaced around 1100 to 1110 by a Norman building with a nave, and aisles with an apsidal sanctuary, later replaced with a larger chancel. On the south side facing you, a mortuary chapel was built in the late 15th or early16th century. In the south east corner of the churchyard stood a chapel dedicated to St Mary, now long gone. In the ruins of this chapel was discovered the Janus Cross. Janus was the God of doorways and had two heads, one looking inwards and one looking outwards. In a dispute over ownership between the vicar and churchwarden the cross was sawn in half. Both halves are now thankfully reunited in the church.

The wonderful pillars in the nave arcading are of Norman date and of a similar design to ones in Selby Abbey and Durham Cathedral. The south porch was added in 1857. In front of you is the base of a Saxon preaching cross.
Now go behind the church to the north side, stand by the seat and look forward over the embankment, known as Hall Garth or Athelstan’s Palace.

King Athelstan lived from 895 to 939 and was the first king of all England. He owned the manor of Sherburn and had what was probably an administrative headquarters on this site. A manor house, rather than a palace is now only represented by the lumps and bumps in the field today. He gave the manor to the Archbishop of York in 938 and it became one of their many residences until 1361 when they moved over to Cawood. During the time of Archbishop Walter de Gray, King Henry III granted a charter for a weekly market in the village each Wednesday, something that continues to this day. Just over the horizon, one of the most bloody battles in English history took place. This was the War of the Roses battle of Towton, which effectively put the Yorkist king Edward IV on the throne of England, but with a huge loss of life on both sides.

Return to the main path through the churchyard and turn left to leave the churchyard by the east gate, turn left and cross Sir Johns Lane with care, continue along Kirkgate until you reach the old girls and infants school. 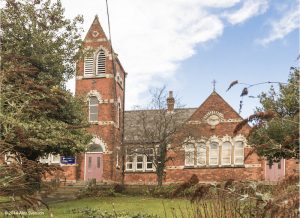 The school for girls and infants was built in 1876 in response to the governments act to provide education for all children. The school was build to accommodate 260 girls and infant boys up to the age of eight years and cost £2000. Boys over the age of eight were educated at the Hungate school. The school closed in 1976 when the new Hungate school was built. The school was in two halves, girls on the right and boys on the left. See the roundels in each gable above the windows. This is a very unusual design for a school built at this time and may be by the Liverpool architect Peter Ellis.
At the moment the building faces an uncertain future.

Continue down Kirkgate to the traffic lights and, taking great care, cross the road. Behind you is the Old Boys or Hungate School. 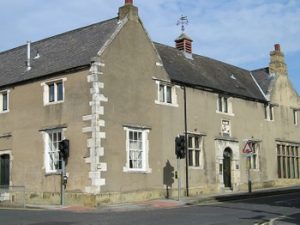 The school was built as a result of a bequest in the will of local landowner Robert Hungate who died in 1619. It would seem the executors of the will were reluctant to part with the money and by 1625 nothing had been done to carry out Robert’s wishes. There is no record of when the school was actually opened, but it would seem to have been in operation by 1650. The school provided education for boys only. The charity did provide some opportunity for pupils to go on to university. As a result of labour shortages in World War I, from 1914 onwards boys were granted labour certificates to enable them to leave school prematurely, many getting work in the mine at Micklefield, some five or six miles from Sherburn. By 1917 there were very few boys left in standard seven. In 1916 the headmaster Mr. Potts left his post to join the army. The school closed when the new Hungate school opened. The building was used as a community centre until being taken over by the local doctors and given a new lease of life as a medical centre.

Walk a few yards down Low Street and the Red Bear Pub is opposite. 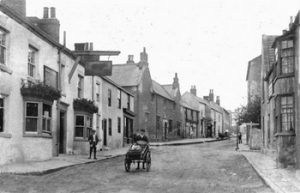 During the coaching era the Red Bear was kept by Mr. Howe. This was the main coaching inn in the village and the place where the London to Edinburgh mail coaches changed horses on the stage from Ferrybridge to Tadcaster. This inn had a vast yard of stables and, as well as horsing the mail coaches, you could hire a post chaise to take you to Leeds or Selby. The post chaise was the favoured form of transport for eloping couples, often pursued by the father of the bride. A post chaise was drawn by a pair of spirited horses and driven by a post boy riding postillion, they had a reputation for reckless driving and often tipped over. There was also a courtroom in the Red Bear where the petty sessions were heard. This part of the village was established as a planned town by the Archbishops as lords of the manor in the 13th century in order to raise revenue. This meant the saxon centre of the village moved away from the church.

Looking to your left a row of modern shops has been built on the site of the old methodist chapel. 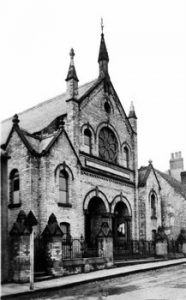 The first methodist chapel stood in chapel yard, now under the Co-op car park. This next chapel in Low Street was opened on the 25th April, 1872. The architect was Mr E Taylor of York. It was closed in1986 and demolished.
The new chapel opened in 1987 and stands behind the shops built on the site of the old chapel.

Continue along Low Street until you reach Starkey’s Butcher. On the other side of the street was the site of Sherburn’s windmill. 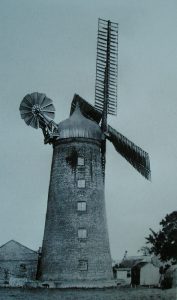 The mill was one of the last working windmills in the area. In 1921 the mill caught fire. A bucket chain was formed, but to no avail. The end of the mill was spectacular when the sails broke loose in the wind and as they turned in flames bits broke off and flew towards the church and away from the village. The wind was in just the right direction, otherwise the chapel and half the village could have gone up in smoke. There is now no trace of the mill.

Continue along the street and enter the playing fields by the Eversley Centre. 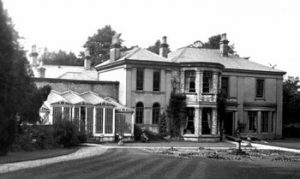 Eversley Garth was a fine house built in the mid nineteenth century, and for many years was the home of the Day family. William Day was an owner of coal mines in the Barnsley area. He was involved in village life and donated a bell to the peal in All Saints Church, which is still rung today. Later the Fletcher family lived in the house. The house and its wonderful gardens disappeared under the housing development you now see today. Over to your left on land close to the village, the battle of Sherburn took place 15th October 1645 this was only a small skirmish but did have an effect on the outcome of the battle of Marston Moor, having weakened the royalist cavalry .

You may now retrace your footsteps to return to the village, or you may carry on over the playing fields to the far corner towards the church and through a footpath to bring you back to the church.