The original station, called Milford, opened in 1834, only had a 6” high, 8 feet wide platform on the westbound side with a 2-storey house. On the ground floor of the house one of the rooms was used as a booking and waiting room while the rest of the house was a dwelling for the station master.

After the closure between 1840 and 1850 a single storey extension in brick was added to provide improved booking and waiting facilities. In 1869 proper platforms were installed along with the waiting shelters seen on the photograph. The original platform can be seen in front of the shelter. The station was renamed South Milford in 1869. The station masters dwelling was doubled in size in 1878 by the addition of the 2 storey building set back from the railway. All the buildings including the signal box were demolished around 1979. 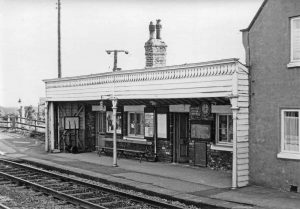 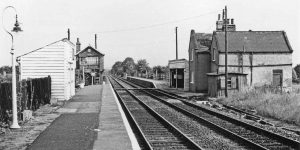